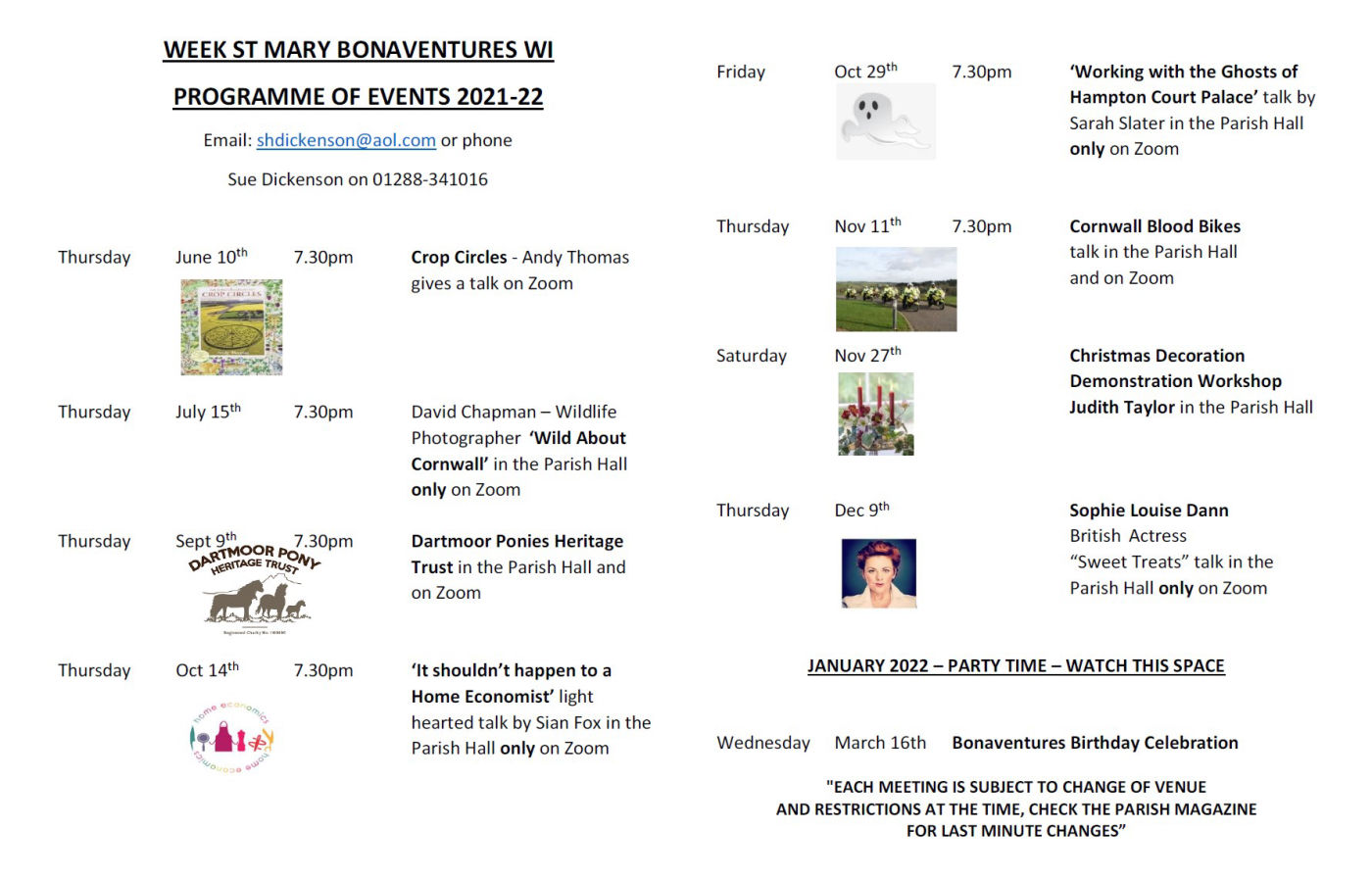 The Women's Institute have completed two projects in the past, one about the Week St. Mary County Primary School in December 1976 and a general one about the village between the years 1939 and 1959. Click on the links below to read those articles.

Compiled by and written by Sylvia Johnstone (1985) 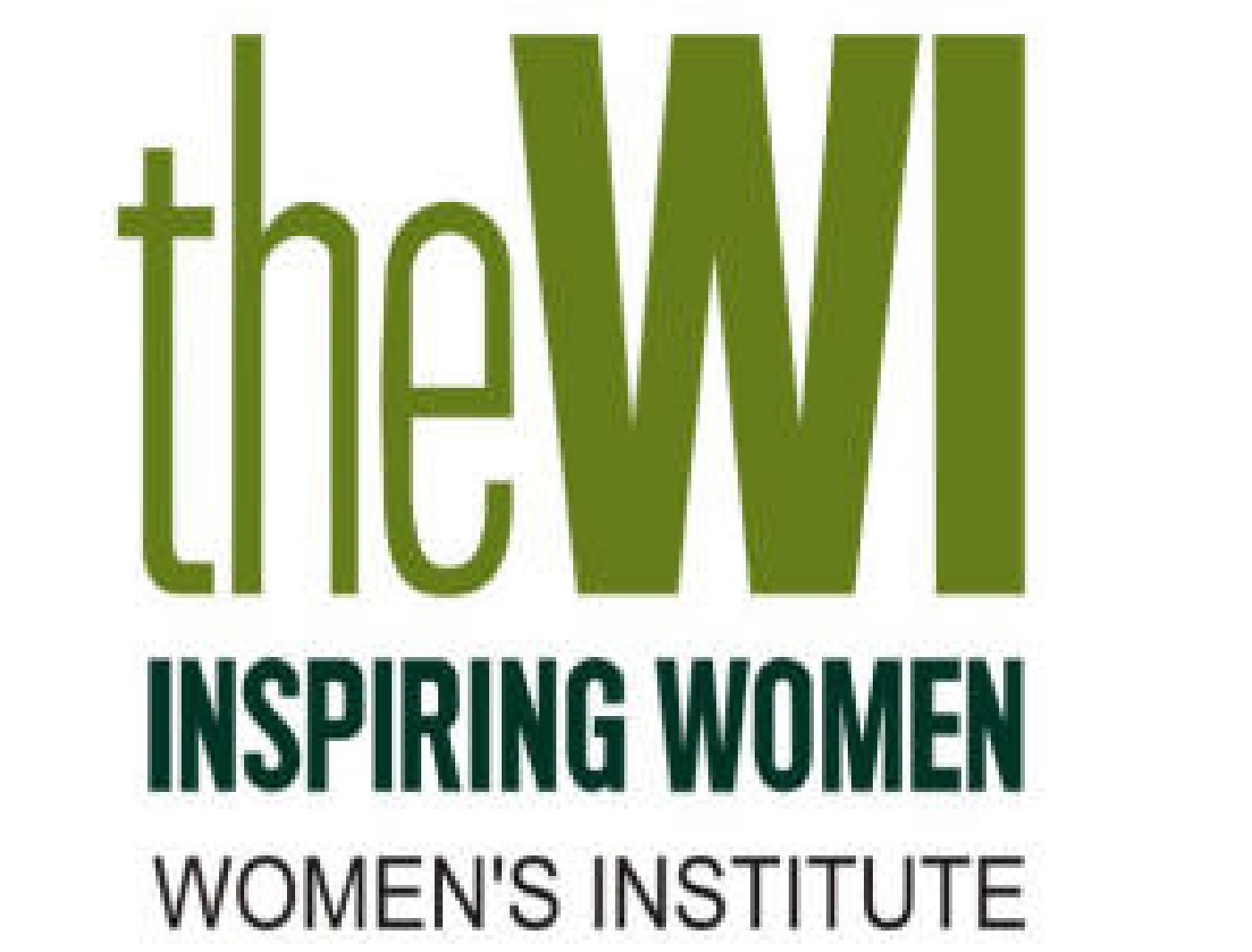 The local branch of the WI was founded on 16th March 1945. It belongs to the Stamford Group and is affiliated to the National Federation and the Cornwall Federation of Women's Institutes.

In 1993 two embroiderer members of the branch, designed and made a banner which was carried at a Garden Party held at the home of Lord and Lady Falmouth to celebrate the 75th anniversary of the formation of the Cornwall Federation of WI's. This banner showed the WI logo of a tree with the letters WI on it and a representation of Thomasine Bonaventure, Week St. Mary's most famous daughter, pictured as a shepherdess with her sheep and lambs.

February 1945: I have concentrated on the first few years of the life of our institute. Records or minutes as we call them today varied enormously, some were really detailed and very interesting others contained brief facts. I know today that we all prefer brief minutes, as we like to get the business out of the way, but perhaps we should spare a thought for someone in the future perusing our records.

1945 February 16th: Saw the the foundation meeting take place at 7-30pm in the school. This was of course before the war ended . The chair was taken by V.C.O. Mrs Julyan also in attendance V.C.O. Mrs Quance. 33 women were present. The resolution was taken that a W.I. be formed in Week St Mary this was proposed by Miss Retallack and seconded by Mrs Stevens who use to live in Great Hills. The committee was formed and consisted of 12 members, it was decided to encourage young members to join at the age of 14 years. 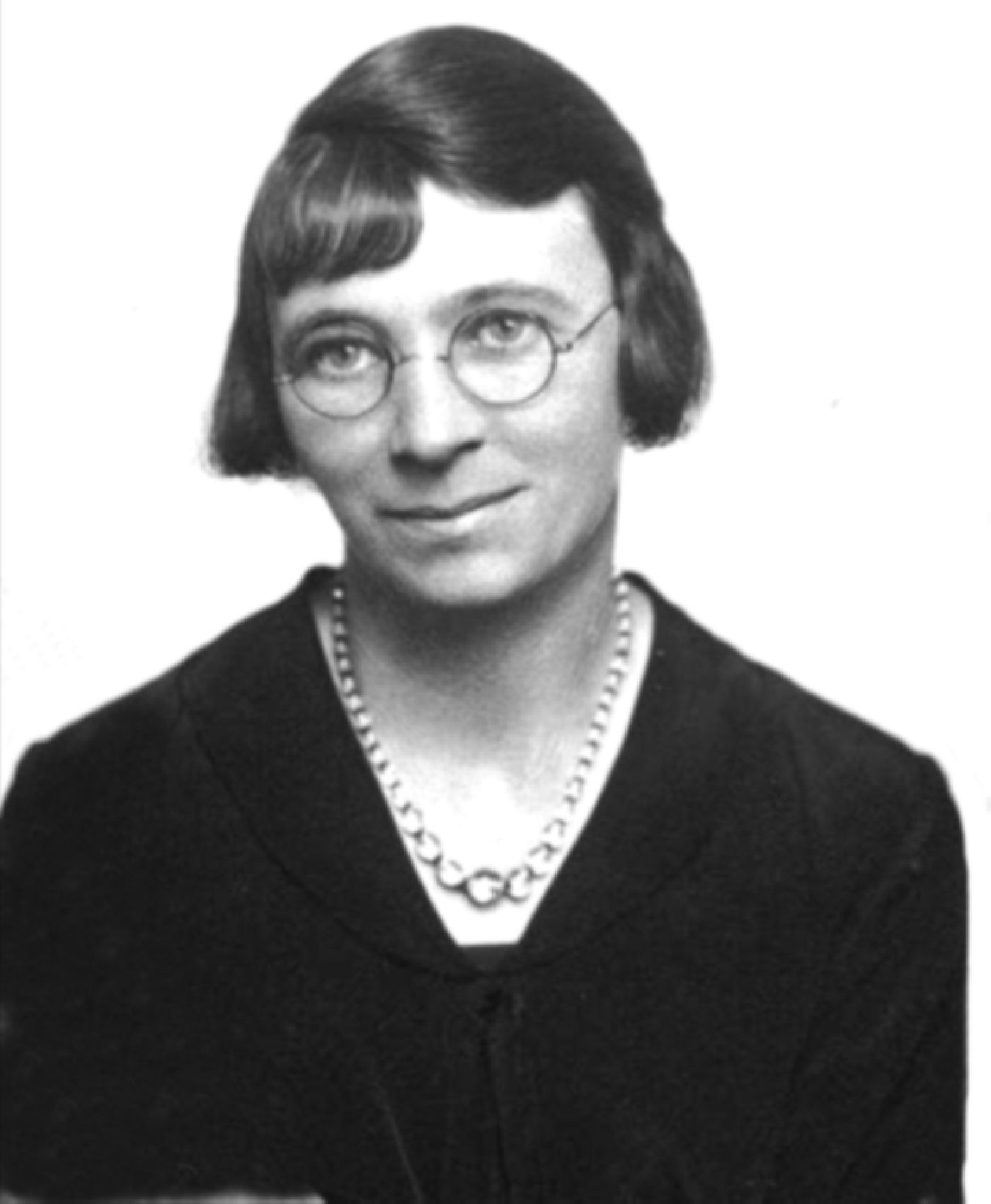 March 1945: A month later the first meeting took place this time with 37 members. A letter of welcome was read from Lady Denman chairman of the National Federation. 35 ladies enrolled and paid their subs of 2/6.

A ballot took place as there were two nominations for president – Mrs Daisy Martin was elected, she was the wife of the school headmaster and lived in the school house (The Beeches) now known as the Green Inn! It was decided that "Jerusalem" be sung at the start of every meeting with the National Anthem at the close.

Daisy Matilda Martin:
Her granddaughter Linda Cobbledick still lives in the village, and is now a member of the W.I. at Week St. Mary as well as being a co-owner of this web site!

April 1945: This month a member of the Cornwall Beekeepers Assn. Attended his talk was on bees and flowers, it was illustrated with lantern slides. It was agreed that 6d should be charged for non members who wished to attend the meetings.

May 1945: Mr Bloomer of St Gennys was the speaker on weaving and dying. Miss Ward a member of St Gennys youth club also attended and exhibited her work and demonstrated on a loom which was most interesting to a good audience of members and visitors. The Social ½ hour which was held at the end of every meeting was a spelling bee and a guessing game.

June 1945: Miss Cock a member of the County Staff at Truro gave a fruit bottling and pulping demonstration. New members were again welcomed.

July 1945: Mrs Alford was to attend to give a chair repairing demonstration but was too ill to attend. At very short notice a Mrs Huxley of Bude talked on "Jobs about the House"

September 1945: Miss Cock from County Staff turns up again, this time with a demonstration on pickling.

October 1945: A round table conference was held to get ideas for next years programme.

December 1945: About 40 members and visitors attended, the evening was given over to songs, games, competitions and a short play. This was organised by Mrs and Miss Masters and Mrs D Sandercock. Carols were sung.

January 1946: This meeting was postponed to the end of the month due to illness and bad weather conditions. Mrs Alford of Jacobstow gave the chair repairing demonstration.

February 1946: First mention of the Group Meetings – a list of cups to be competed for in the Handicraft competitions at the St Austell show was announced and a wish that members would enter. It was decided that the next meeting on March 15th should be the first birthday party.

March 1946: Mrs Martin presided and presented the Institute with a cake that was later cut by Mrs Ridgeman, the oldest member. Several names were mentioned as a possible delegate to the Annual meeting in London - Mrs Alfred Sandercock was persuaded to considering attending.

July 1946: Mrs Alfred Sandercock (Doris) gave her report on the Annual meeting in London, her arm was indeed twisted.

November 1946: The competition was for the best autumn leaves in a jam jar.

December 1946: The name of Miss Winnie Rogers appears as a prize winner.

1947: In January the Hon. Mrs Waller gave a talk on Palestine. In March a drama group was formed, also this month Miss Smale gave a very interesting statement of accounts of the group meeting showing a profit of £7-14-6. The birthday cake was this time cut by the youngest member Miss Sheila Jones.

Competitions featured as a popular item. In June 1947 a Miss Martyn proposed a sponge but Mrs Ayres favoured a trifle so both were included. At every meeting in 1947 new members were welcomed (unfortunately names were not mentioned). Miss Smale was the delegate to the Annual meeting and gave an interesting report. In October 1947 we read that a telegram from the proposed speaker was read stating that owing to her car being out of order she was unable to come. At very short notice the Rector gave a talk on Palestine. Mrs Gubbin gave a vote of thanks.

1948: In the minutes there are many examples of our Institutes concern with Village matters and indeed national concerns. For the years immediately following the war there was a Bring & Buy stall at the monthly meeting this was in aid of the "Soldiers, Sailors and Airman's Families".

January: The competition was for the best potato peeled in the dark this was won by Miss Winnie Rogers and Mrs W Ridgeman.

February: members decided letters should be sent to McFisheries to get a regular fish service in the village. A letter also went to the Telephone manager about the restoration of the light in the Kiosk.

June: We learn that the W.I. went to Ilfracombe for their Annual Outing. A list of pianists for the year – Mrs Sandercock, Mrs Treleaven, Miss Orchard and Miss M Cobbledick (does this suggest that more people could play the piano then).

April: Mrs Vedrenne judged the competition (she used to live in Burdenwell Manor).

December: A letter was written to the Church Council asking that they renovate the path to the Rectory Room.

February 1949: a resolution from St Dennis was read and our amendment was passed that soap and towels should be placed in trains, a letter was sent.

May: it was proposed that the Australian food parcel be kept for until Christmas the contents then used for the party (rationing still on).
September: it was proposed that the secretary write to the bus company for details of their monthly bus service to Plymouth, another letter was written at the October meeting stressing that the nearest bus point to Plymouth could only be caught some considerable distance from the village which would mean hiring a taxi.

January 1950: a letter sent to Tavistock laundry requesting them to call at the village. Back to the National bus company, the request for the Plymouth bus was refused, it was proposed to defer appealing until after the General Election. The Drama group performed a sketch called "Between the soup and the savoury" in February, this was much enjoyed. In March it was decided to write to Truro asking them to intercede for us to get a bus service to Plymouth.

June: Saw that Mrs G Masters was president and there were 35 members present and 4 new members were welcomed. A letter was also sent to the Parish Council stating that the bridge by the footpath at Castle Ditch was badly in need of repair.  In July members went by bus to Widemouth and then to Bude Picture House. In December, at the Christmas party, H Sillifant provided the music on the piano and G Masters on the drums.

February 1951: Mrs K Gubbin presided as vice president. In May arrangements were made to visit the Festival of Britain. The president by now was Mrs R Orchard. In July there was an unusual competition "The largest number of white butterflies" this was won by Mrs Paynter. Two new members joined in September Miss B Pooley and Miss I Colwill. By December Mrs D Treleaven was president.

January 1952: Bournemouth was chosen as a venue for the Annual outing. Mrs Annett gave a talk on Bermuda. March saw the 7th party – 4 members were invited from each of these institutes, Poundstock, Marhamchurch and Jacobstow. It was proposed that Miss Fishleigh light the birthday cake candles, Miss I Colwill to blow them out. Mrs Treleaven assisted by Mrs Horrell and Miss Smale to cut the cake and we should have a sit down meal at 7-30pm.

March 1953: Food for the Coronation tea be purchased in equal quantities from Brewers and Sandercocks. Two new members have joined Nurse Piper and Nurse Weiss. (They lived in 1 Broadclose, Week Green). On November 12th a Cherry tree planted on a site owned by Brewers. The Institute gave a party for the village children in the Rectory Room during the Christmas holidays.

Time has not allowed a full research of the records plus the fact that some of the books are missing and thus the continuity is lost. 1985 Sylvia has ended her report by returning to 1985 when she became a member for the second time. Mrs Watkinson was secretary then (she sadly died a few months ago [2005]); what a joy her minutes were: 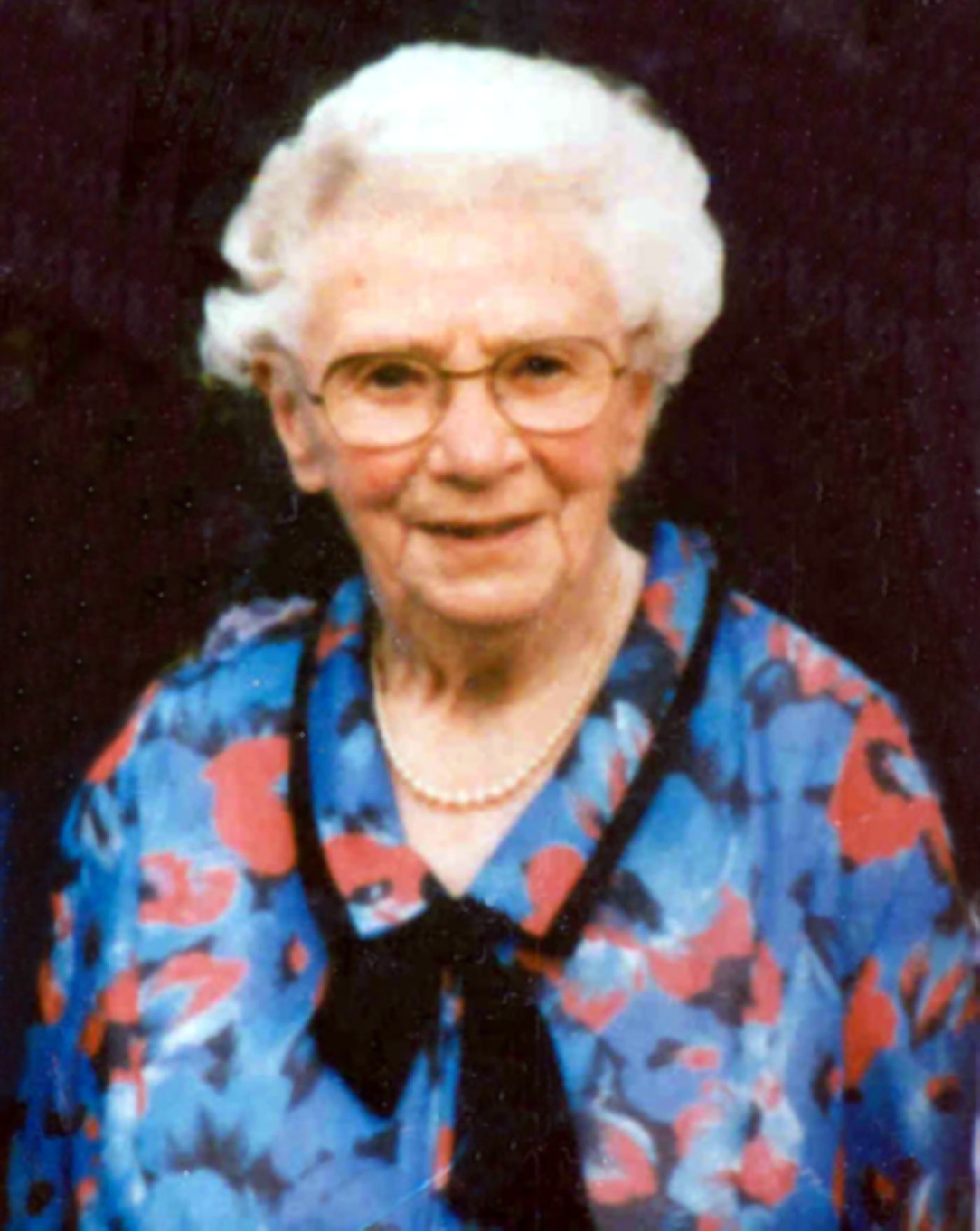 "Our 40th Birthday Party was held on March 20th 1985 with 55 people present. The first president, Mrs Daisy Martin who is 90 years old was unable to attend owing to poor health, it was agreed that a piece of birthday cake and some flowers be sent to her."

It is so good that we are still going after 60 years and may we hope that it will still be going in another 60 years. 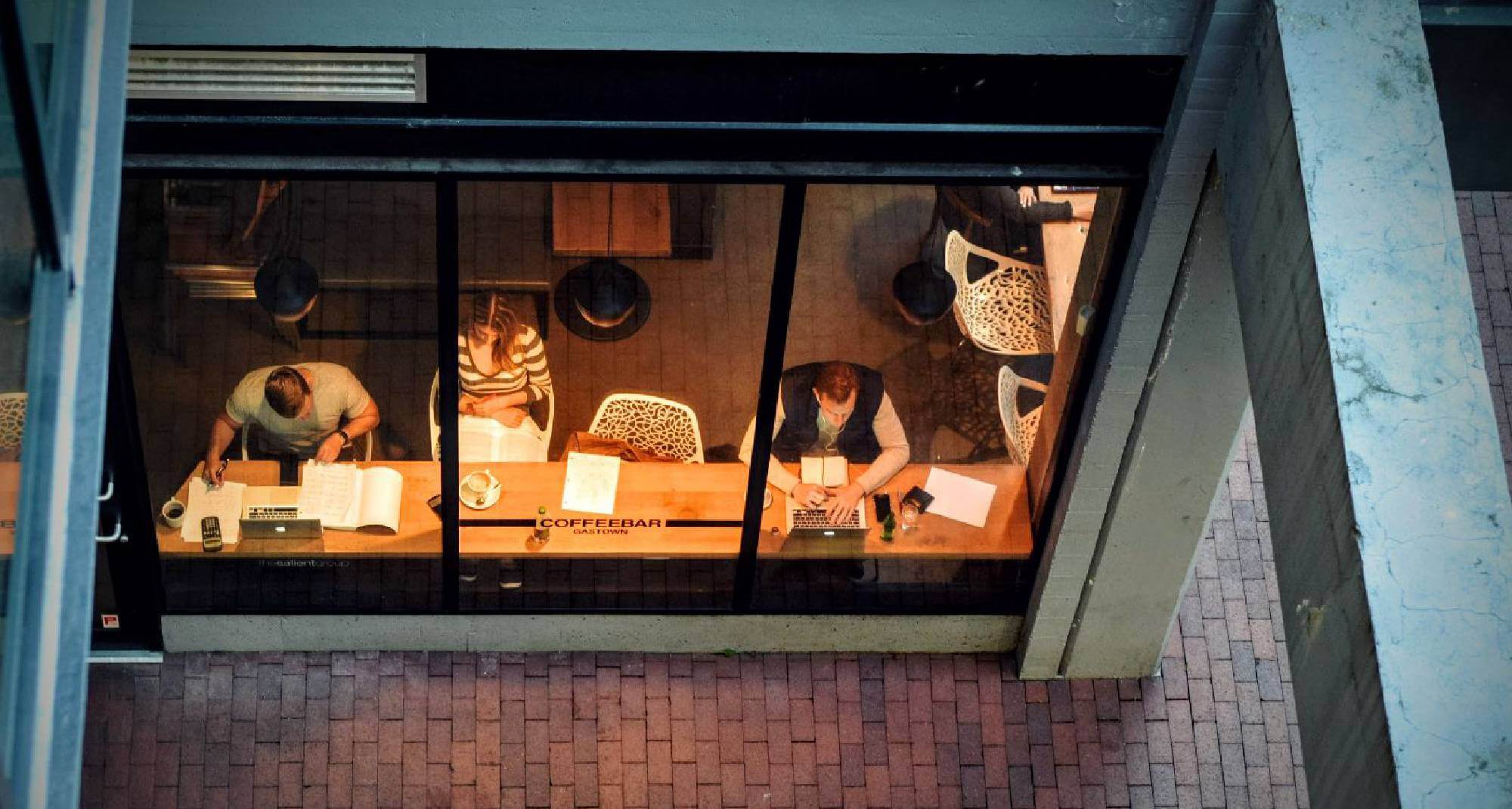