WEEK ST. MARY CHURCH STRUCK BY LIGHTNING
not once, twice, or even thrice...!

According to the most recent Miscellaneous Register, pertaining to the church of Week St. Mary, there were several recorded instances of the tower being struck by lightning. On 8th November 1878 the south-west pinnacle of the tower was struck by lightning, at 6.45 am, with no record of any damage caused, if any. Other occasions on which the tower was struck are recorded as follows: about 1688 the north-east pinnacle struck and during the winter months of 1812, 1843 and 1865 the north-east, south-east and south-west pinnacles were struck. 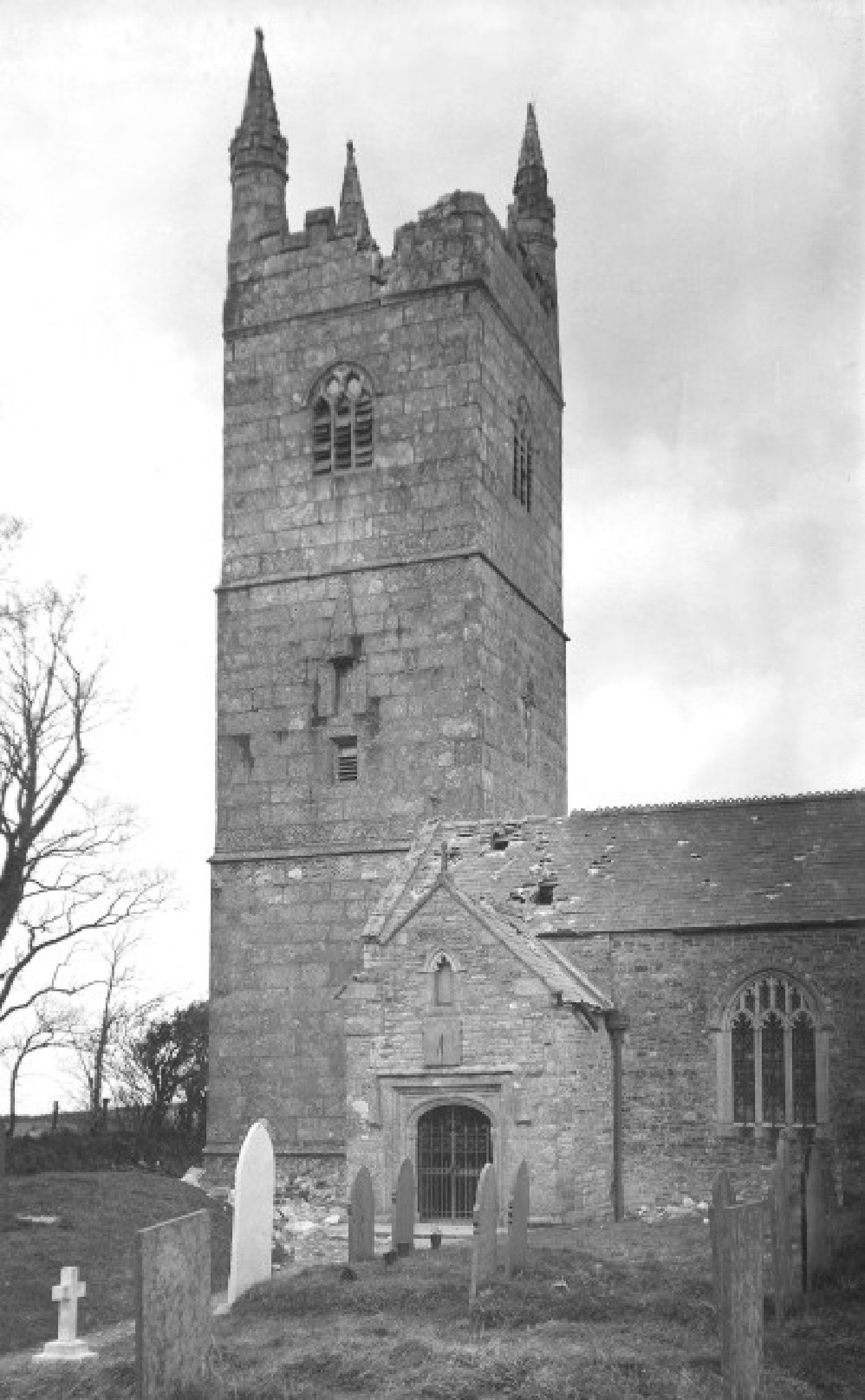 After a violent hailstorm at 1.25 p.m. on Thursday 21st February 1935, the south-east pinnacle of the tower was struck by lightning.

The lightning strike brought down the south-east pinnacle, causing masonry to crash down and smash through the roof, causing such devastation that the church had to be closed. An appeal for funds was launched immediately and repairs begun.

The opportunity was taken to replace the variegated floor tiles favoured by the Victorians with stone slabs and the church was duly re-opened for worship on 16th January 1936.

As reported by The Cornish & Devon Post
PINNACLE CRASHES THROUGH ROOF

A close investigation made yesterday revealed that damage estimated at £2,000 was done to the ancient parish church at Week St. Mary, when the tower was struck by lightning on Thursday afternoon after a short, but heavy, thunderstorm.

One of the four pinnacles crashed, portions going through the roof in several places, and inside the church oak beams splintered under the weight of the falling masonry and several of the oil lamps that illuminate the interior were smashed to pieces.

The church doors have been locked and danger notices have been posted around the churchyard.

It is expected that it will take something like six months to repair the church, and in the meantime the parish services will be conducted in the rectory hall.

The storm came on with surprising suddenness. About lunch-time on Thursday the weather was almost perfect at Week St. Mary. Then, without the slightest warning, the village was visited by a sharp thunder and hailstorm that prevailed in full force for about 20 minutes, leaving the highways covered with hail.

Of the four pinnacles at the top of the church tower only three remained, and the churchyard was strewn with masonry. The damaged tower and the gaping holes in the roof beneath told their own story, and a glance inside the church revealed the chaos that the lightning had caused.

Fortunately, there was no one in or near the church at the time. The west end of the church underneath the tower was covered by the fallen masonry, and one stone weighing at least a quarter of a ton, had crashed through the roof and broken several oak beams. Many oil-lamps and pews (the latter having been placed in the church only five years ago) were smashed.

In the churchyard many of the larger stones had been forced into the earth to a depth of a foot.

Reproduced by kind permission of the Cornish & Devon Post