We are indebted to his granddaughter in Vancouver, Canada, for this article 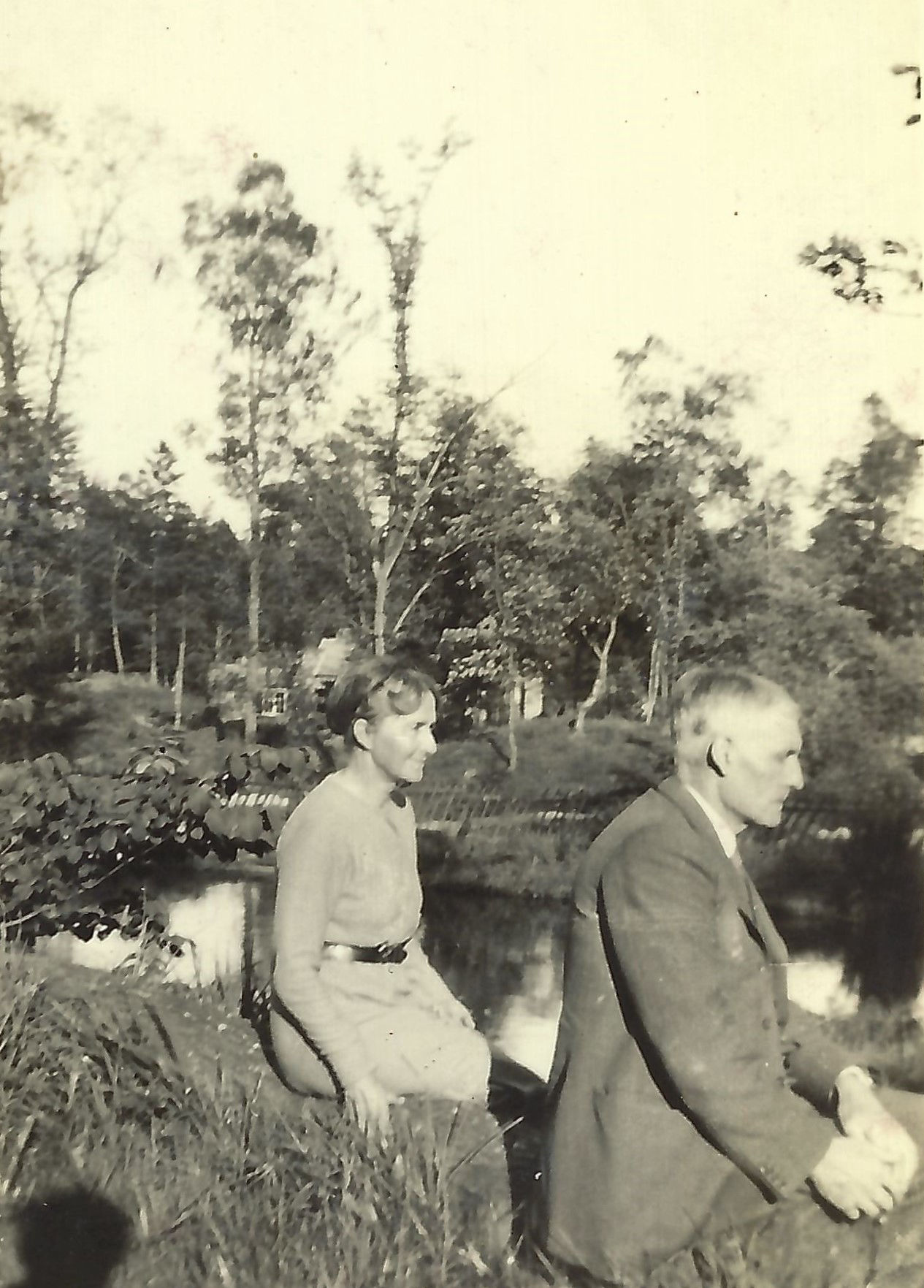 FIRST BRIDE FOR 122 YEARS - The first bride from the Rectory to be married at the Parish Church for 122 years was the record of Miss Mary Nancy Heward Hambrook, younger daughter of the Rev. A. Hambrook and Mrs. Hambrook, who, at Week St. Mary, Devon(!!), on Saturday, was married to Mr Arthur Donald Turner, only son of Mrs. M. Turner and the late Mr. Arthur Turner, Blenheim Road, Wakefield. The ceremony was conducted by three of the bride's relatives who are in Holy Orders, her uncles, the Rev. F. A. Page (Northfleet, Kent) and Rev. C. A. Page (St. Michael's, Derby), and her father. There were two organists, Mr. T. Rogers, and a second cousin of the bride, the Rev. G. L. Michell, of Worcester. Given away by her brother, Mr. Robin Hambrook, the bride looked charming in a gown of white fine ribbed woollen material of French design, with a short train, and her net veil was held in place by a cluster of white gardenias and myrtle. She was attended by only one bridesmaid, Miss Josephine Skittery, of Long Sutton, Somerset, who wore lavender wool crepe, with veil of lavender net, and carried a bouquet of almond and wild cherry. She wore earrings, the gift of the bridegroom. The best man was Mr. Edward Varley, of Ossett, and the ushers Messrs. Martin Swann, William Parsons, Richard Voelcker, and John Parsons. The bridegroom's mother was in a grey two-piece suit, and the bride's mother wore a sage grey ensemble. The church was decorated with primroses, anemones, pink tulips, almond and wild cherry blossom, and was filled with parishioners, who subsequently were guests at a reception in the Rectory Hall. Amongst the guests was Sir Howell Williams, D.L., of London, a great-uncle of the bridegroom. The couple later left for a motoring holiday in South Cornwall, the bride travelling in a brown ensemble. The bridegroom is a member of the firm of Arthur Turner and Co., Ltd., building contractors, Wakefield.

Well, as usual with this kind of reach-out, you've opened up yet another new fascination. I've just spent an hour or so before I get going for the day scanning through some of the A-Z items on the village website. I don't have a lot of photos of Week St. Mary, and although my grandfather was a prolific writer, nothing he might have written on Week St. Mary has come down to me. The photos I do have are formal ones of the church, inside and of the damage to the exterior. However, I do think the photos from my parents' wedding in April 1939 which show parishioners at the wedding lunch at the Rectory Hall. They are professional quality but very large size, so I'd need to get them specially scanned if you would like them. The interesting thing is that the 1939 registration was taken in October that year, so anyone in the photo is likely to be also on the registration document.

If David is interested, I can do a short profile of my grandfather for the website, but it will have to be in January. I don't know if you would have heard this, but he had a leg amputated in a motor-cycle/sidecar accident on the Lynton hill while holidaying with his family in 1932. This meant that he was unable to manage his parish up in Nottingham and was lucky to get a 'parish swap' with the then rector of Week St. Mary. At least that's how I read the press clippings I've been able to find. I found him a daunting man, holed up in his library smoking his pipe, but I adored my grandmother Margaret. This shines through in one of her letters written in 1944 to my father who was training in Canada (I was born in 1940). My mother seems to have spent most of 1944 in first, Week St. Mary at the Rectory, but not long after in Widemouth Bay. We returned to Cornwall, post war, to a farm on the cliffs near Delabole, and after that idea fizzled, lived for a while in a gypsy caravan in Farmer Bluett's field at Widemouth Bay. All this before we moved to Devon in 1951.

I had no idea where this photo of Arthur and Margaret was taken, but now I'm wondering if it was in Week St. Mary. Is there (or was there) a pond or a stream near the Rectory there?

Fascinating website ... now must get back on track. Lovely bright morning here in Vancouver.

Church History : This Place of Worship was founded by 1900, though it is now closed, but we don't yet know when, and the premises are now in secular use.

This was a Mission Church to St James, according to Derbyshire Record Office's catalogue of Church of England Registers - they hold records of baptisms here for the periods 1900-1904, and 1907-1919. Kelly's Directory of 1912 provides the address as Osmaston Road, and says its curate in charge was then Rev. Arthur Hambrook.